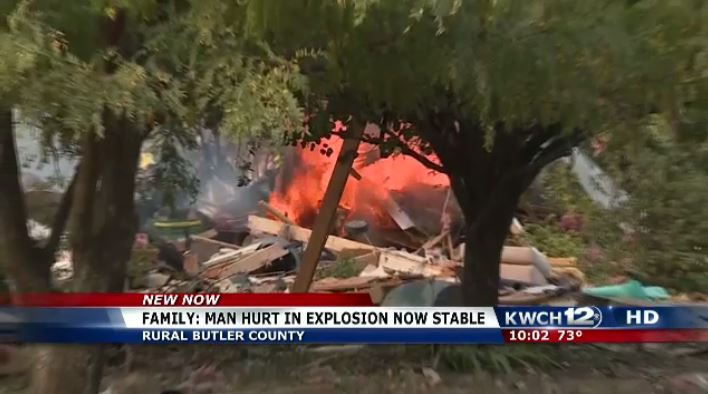 Gifford said investigators determined the explosion to be accidental and said the cause of the leak is undetermined.
--------
Update: Butler County Emergency Manager Jim Schmidt says a 67-year-old man suffered critical injuries when his home exploded in rural Butler County on Monday.

Schmidt says neighbors called in the explosion in the rural subdivision. We're told an off-duty sheriff's deputy heard the explosion and pulled the man from the basement of the home.

The man was transported to the hospital in critical condition with second and third-degree burns, but Schmidt says he was awake and talking.

Schmidt says there were animals in the home that also unaccounted for.

Investigators will remain on scene to determine the cause of the blast. Schmidt says a propane tank has been isolated and utilities to the home have been turned off.

Fire crews from Rose Hill, Andover, August and Douglass all responded to the scene.

Emergency crews are on the scene of an explosion in Butler County.

The explosion is located at 155th and SW Indianola Road. That's northeast of Rose Hill.

Firefighters on scene tell us one man hurt in the explosion is hospitalized in critical condition.

On mobile? Use this link: LIVESTREAM

Stay tuned to Eyewitness News on-air and online for the latest.