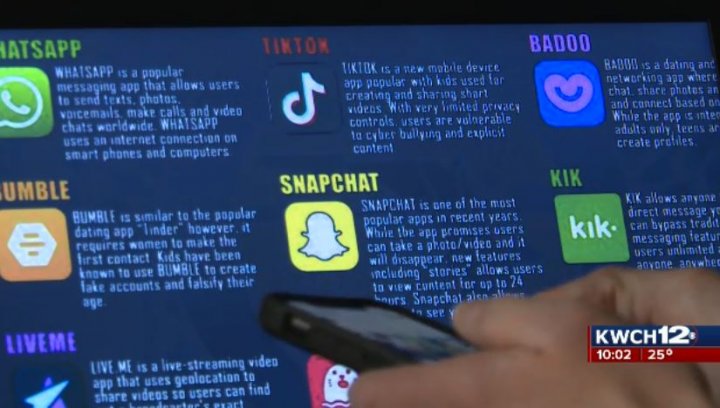 WICHITA, Kan. (KWCH) The sound of leaves crunching outside a girl's bedroom window on the night of Nov. 6 led to a disturbance, an arrest, and the uncovering of evidence of child sex crimes extending beyond Kansas.

The Wichita Police Department arrested 62-year-old Mark Lawson on several charges following the disturbance outside the home in the 1900 block of South Custer. Those charges include aggravated assault, battery, criminal trespass, breach of privacy, electronic solicitation, and sexual exploitation of a child.

A detective interviewed a 15-year-old girl who said she was in her bedroom when she heard a noise that sounded like leaves crunching outside her window. The girl's father went outside to investigate and tells investigators he found Lawson standing outside his daughter's window.

The father says Lawson told him he was looking for his dog, but this is the same excuse he'd used in two other incidents where he was seen leaving the family's backyard on South Custer.

The father says he told Lawson he was calling the police, and Lawson told him he had a gun. He says Lawson then pushed him, trying to get out of the backyard. The father says he grabbed Lawson and was eventually able to get him to the ground where he held him until police arrived. The yard's fence had a "No Trespassing" sign, and the father says Lawson did not have permission to be in his backyard.

A detective interviewed Lawson, who admitted that he'd been arrested before "for this same thing."

Lawson admitted to attempting to look in the girl's window and said he only told the girl's father he had a gun because the father said to him that he had a knife.

"(Lawson) denied getting sexual gratification from looking in the window and said it is for the thrill, comparing it to skydiving," the affidavit says. "(Lawson) stated he has looked in numerous windows for an unknown number of years, saying he was drawn to the light from the window."

The affidavit says Lawson has prior cases, including with the 15-year-old girl at the west Wichita home, of looking in teenagers' windows, but denies being attracted to teens or children.

Lawson had a cell phone turned off when police arrested him. He denied having anything illegal on the phone, including pictures or videos taken while looking in windows.

A detective asked Lawson about social media accounts and began naming specific accounts. Further investigation led to the discovery of a large number of chats where investigators say Lawson portrays himself as a 13-year-old boy and asks for sexually explicit photos and videos. An investigation into one increasingly sexually-explicit conversation revealed it involved Lawson and a 10-year-old girl in New York state, the affidavit says.

The Child Advocacy Center of Sedgwick County says predators are lurking on these platforms, reaching out to kids and teens.

"Adults are very clever in the ways that they trick people, especially young teenagers, into those kinds of situations. There are so many other apps out there, and they’re constantly changing, and they just continue to provide new and new avenues," said Child Advocacy Center Executive Director Diana Schunn.

Schunn said, " Snapchat is extremely helpful because the post just disappears, and that’s a really common situation we oftentimes see. Bumble, there are several other different apps that are out there. Like I said, there’s new ones all the time that are being created."

With the options, that's why Schunn said parents need to talk to their kids about this and be aware of what their kids could be on.

"The other part is being able to let them know the dangers and that even if they do get sucked into something, that they didn’t think they were going to that they still have the ability to come to you as a parent," Schunn said.

She added, "We still teach our children to cross the street holding a hand or stop drop and roll in a fire, and all those different safety things, but this becomes all the more important because they have access all the time. If you yourself aren’t providing them access, trust me, they are getting that access elsewhere."

Schunn said while there are parent controls on phones, they aren't full proof.

Experts say often the offender will try to sound like a child's friend but then start requesting images and use those to intimidate.

"They absolutely count on trust," said Schunn. "They absolutely do, and they know how to manipulate a situation to have a child want to trust them and want to do things; maybe the child has been told never to give your address out. The offender knows ways to work around that. To be able to get additional information."

The National Center for Missing and Exploited Children has resources for kids and parents about online enticement.