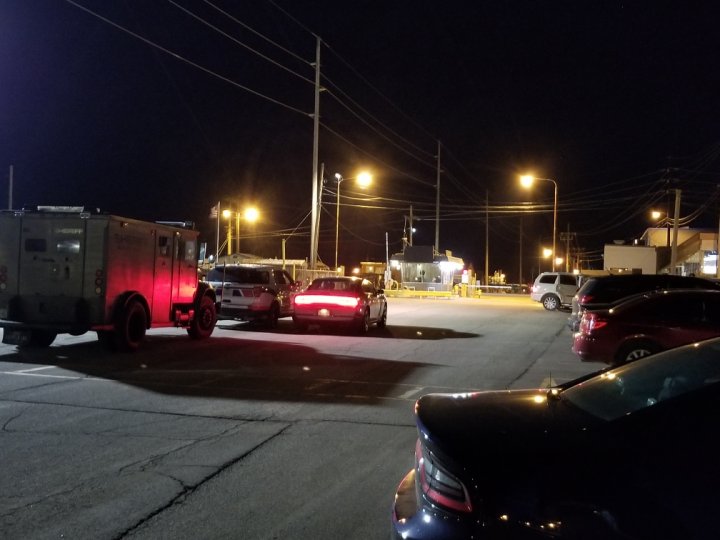 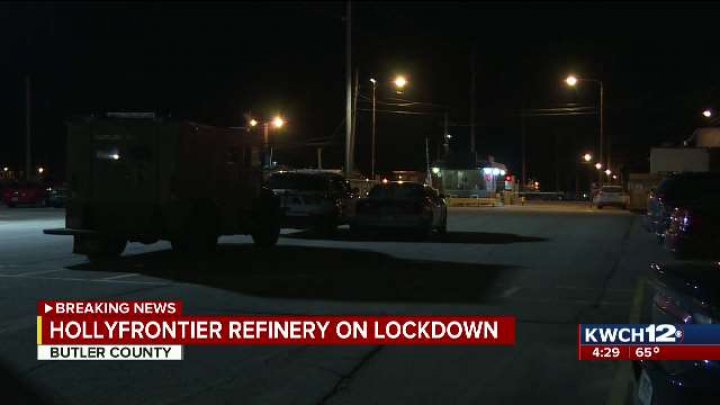 The Butler County Sheriff's Office continues its investigation into a late Wednesday-night call of a possible active shooter the the HollyFrontier Refinery in El Dorado.

In response to that call, responding officers did not find anyone armed nor any weapons at the refinery. By Thursday afternoon, the investigation shifted from what was reported to the man who made the report.

The emergency call, made about 10:30 p.m. Wednesday, reported three men, one with an AK-47, spotted on the refinery's grounds. About seven hours later, the sheriff's office gave the all-clear and the investigation now focuses on whether there were any armed men at the property at all.

The three subjects reported in the call were described as wearing dark overalls, hard hats and masks.

"The refinery called dispatch and we responded out here and set up a perimeter to try to contain these three individuals over on the crew unit of the refinery," Butler County Sheriff Kelly Herzet says.

Herzet says responding officers set up a perimeter at the scene withing moments of dispatch receiving the call. As a precaution, employees evacuated the refinery and SWAT teams from Butler and Harvey counties were activated to search the facility.

"The search ended about 5 O'clock (Thursday) morning. We did not find these individuals in the refinery," Herzet says.

The focus then fell on the one person who reported seeing the three men, a contractor working at the refinery.

"We did interview the contractor that reported seeing these folks. He was adamant he'd seen an assault rifle on the front of a gentleman that was walking in the crew unit."

In a statement released by HollyFrontier, the threat was found to be non-credible.

"We were just working off of what this gentleman told us, but as we interviewed him, we started doubting him more and more of some of the stories he was telling us... The refinery is safe, the schools are safe, the county is safe," Herzet says.

Things are back to normal at HollyFrontier Refinery in El Dorado after a morning lockdown.

Around 10:30 p.m., someone reported seeing three men with a rifle near the refinery.

The facility went into lockdown mode and police and SWAT responded to the scene.

Butler County Sheriff Kelly Herzet says deputies did not find anyone or any weapons at the refinery.

HollyFrontier released the following statement on the incident:

A lockdown at HollyFrontier Refinery in El Dorado has been lifted.

The Butler County Sheriff's Office's responded around 10:30 p.m. Wednesday night for a report of three men with an assault rifle.

Butler County Sheriff Kelly Herzet says a contractor inside the refinery reported seeing the men near the crude unit. The refinery called the sheriff's office and the building was evacuated.

"We responded out here and set up a perimeter to try and contain the three individuals, " Herzet said. "We brought in our folks and the Harvey County SWAT team, and the KHP as well."

After a search of the facility, the sheriff says the three individuals weren't found. They interviewed the contractor who reported seeing the three men and he was adamant he saw the assault rifle on the front of one of the men.

"The search ended about five this morning and we did not find these three individuals inside the refinery," Herzet said. "Business is going to go on as usual for the refinery today. The refinery is safe, the schools are safe, and the county is safe."

The sheriff's office says the contractor has been interviewed and released.

"As we interviewed him, we started doubting him more and more about some of the stories he was telling us. But we decided that it was in everyone's best interest to go ahead and search the area to make sure there was no active shooter," Herzet said.

At this point, the contractor has not been charged with anything.

Authorities have been at the HollyFrontier Refinery in El Dorado overnight responding to a situation that prompted a lockdown.

The lockdown hasn't officially been lifted, but employees are being allowed back inside. No word yet on what prompted the lockdown.

Butler County dispatchers say employees are being debriefed inside the facility now.

No injuries have been reported.

Officials are planning a media briefing soon. Stay tuned for updates online and on Eyewitness News This Morning.
----
Multiple law enforcement agencies are responding to a situation at the HollyFrontier Refinery in El Dorado that prompted the facility to go into lockdown.

Eyewitness News spoke with two workers who say they were told to leave the building they were working in. So far, everyone says they are okay but don't know any details.

We are working with Butler County officials to gather more information and will bring the latest updates on-air and on the KWCH 12 app.

Proposal would snatch student loan payment from your paycheck

Proposal would snatch student loan payment from your paycheck