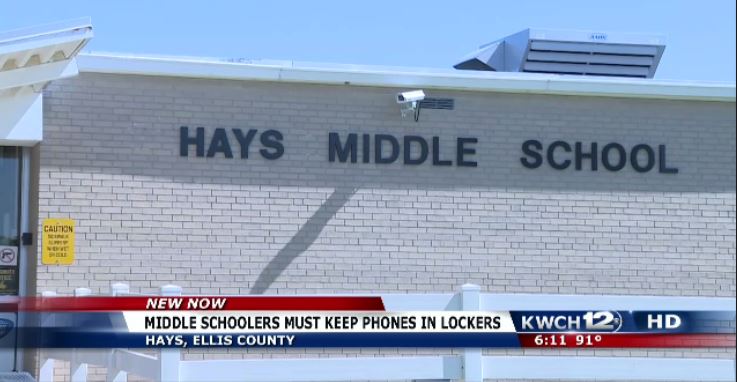 The Hays school district ordered 800 padlocks to make sure students keep their cell phones out of class.

The school's new policy says HMS sudents must keep their cell phones in their lockers during class time.

"One student's phone was found, they lost it and had put it in the office, and it had buzzed, he said it buzzed in one hour, forty times with SnapChat messages," said Thissen.

Hays Middle School Principal Craig Pallister says the new policy keeps students possessions safe. Padlocks have previously been optional for the students, but will be mandatory starting in the fall.

"When they leave for volleyball games, football games, track meets, now they can lock up their iPad and lockup their cell phone and they don't have to worry about it on the buses," said Pallister.

Students will be able to check their cell phones for notifications at their lockers during passing periods.

Parents and students have reached out to Eyewitness News with mixed reactions to the change.

Miquolet Meska, a mother to a Hays Middle School seventh grader says she's fine with the change as long as students can have access to their phones between classes to get a hold of their parents if needed.

Another parent says the change "does not make one child feels safe."

Some parents also said they are worried about students not having their phones with them on buses on the way to and from home or sporting events.

The rule change does not mean less access to technology for Hays Middle School students. The school will be providing each student with their own iPad to use for online learning and other activities.