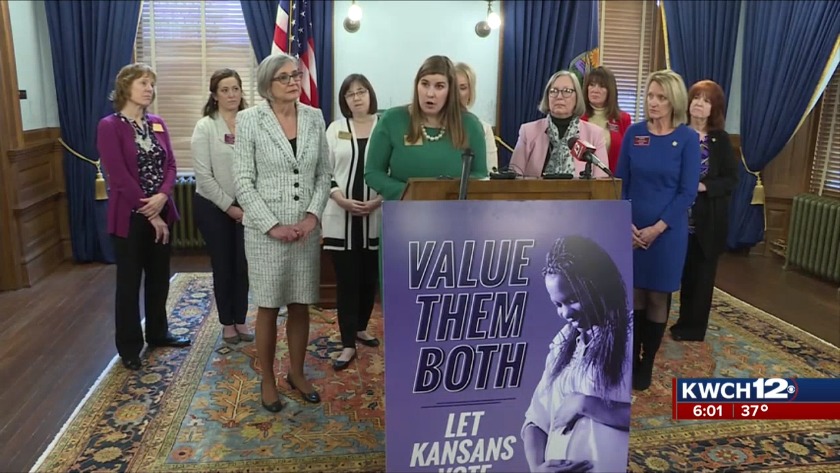 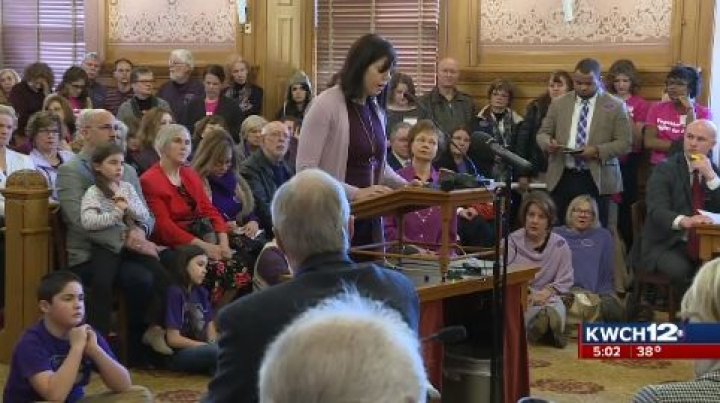 When it comes to passing Constitutional amendments in Kansas, the governor doesn't have a say. But Gov. Laura Kelly says Wednesday's debate in the Senate gave her reason to use her voice to urge the Kansas House to vote down an amendment ultimately aimed at overturning a state Supreme Court decision protecting abortion rights.

Thursday, Gov. Kelly firmly laid out her stance on the Republican leadership's constitutional amendment on abortion in response to last year's Kansas Supreme Court ruling making abortion a fundamental right in the state.

Kelly says the proposed amendment to overturn the Supreme Court's decision would make businesses think twice before coming to Kansas. She says what the amendment aims to do is take away a woman's choice.

"For a future in which the legislature chooses to stand between a woman and her doctor, this would throw the state back into the dark ages," she says. "Legislatures in Topeka with no medical training have no right to make a woman's medical decisions."

A group of women Republican lawmakers responded to the governor Thursday, saying the amendment the Senate passed would allow voters to decide the direction Kansas takes on the issue of abortion.

"Do you want to keep these regulations that we had in place in March of 2019?" asks Rep. Susan Humpries (R-Wichita). "If you do, then vote "yes" on this amendment because it ill put the decision back on the people of Kansas through their elected officials to be able to regulate this industry."

The Kansas House is expected to debate on the constitutional amendment next week. If the House passes it with a two-thirds majority, it will likely appear on the August Primary ballot.

"These are fundamental freedoms that should never be subject to a vote," Kelly says. "They are foundational to who we are as a state and as a nation."

Republicans have pushed a proposed anti-amendment to the Kansas Constitution through the state Senate. The vote Wednesday came even as abortion rights advocates tried to undercut potential support for the measure by arguing that it would lead to a ban on most abortions like a measure being pursued in Tennessee.

The Kansas proposal is aimed at overturning a state Supreme Court decision last year protecting abortion rights and is modeled on a change Tennessee voters approved in their state's constitution in 2014. The Senate's vote was 28-12, giving supporters one vote more than the two-thirds majority necessary. It now goes to the House.

(Copyright 2020 The Associated Press. All rights reserved. This material may not be published, broadcast, rewritten or redistributed.)

There was standing room only Tuesday at the Kansas state capitol as supporters and opponents of a constitutional amendment on abortion testified before lawmakers.

The amendment, if passed, would mean no Kansas constitutional right to abortion and would allow lawmakers to pass other restrictions. This follows a ruling last year by the Kansas Supreme Court saying a woman's access to abortion is a "fundamental" right in the Kansas Constitution.

"Basically (what the amendment) does is it take it back to it was before the Supreme Court made their ruling. We want safeguards. We want to make sure abortions are safe and rare in Kansas," Rep. Renee Erickson (R-Wichita) said when the 2020 legislative session kicked off last week.

More than a dozen people spoke in front of lawmakers, urging them to place the amendment on primary election ballots in August.

About 30 others spent Tuesday afternoon, asking for that not to happen. Among them was Rachel Sweet, representing Planned Parenthood.

She says Kansas legislators "will not be on the right side of history should they allow a vote that could strip these rights from women."

Supporters of the amendment argue it would reinstate regulations Kansas had in place before the Supreme Court's ruling, saying it sets a standard of cleanliness at facilities, regulates care before and requires parental consent before a teenager can terminate a pregnancy.

Opponents say the amendment would take away a woman's right to making a choice for themselves, leading to unsafe procedures and hurting low-income and minority women the most.

The constitutional amendment requires a two thirds majority support from lawmakers in both chambers to pass a resolution before it ends up on the ballot.

Republican leaders say there's an urgency to get the resolution passed with the amendment's final consideration up to Kansas voters as there are more cases dealing with abortion in the court system.

Don't Fall For It: The Department of Homeland Security is not enforcing a national quarantine
Related Documents
Related Stories