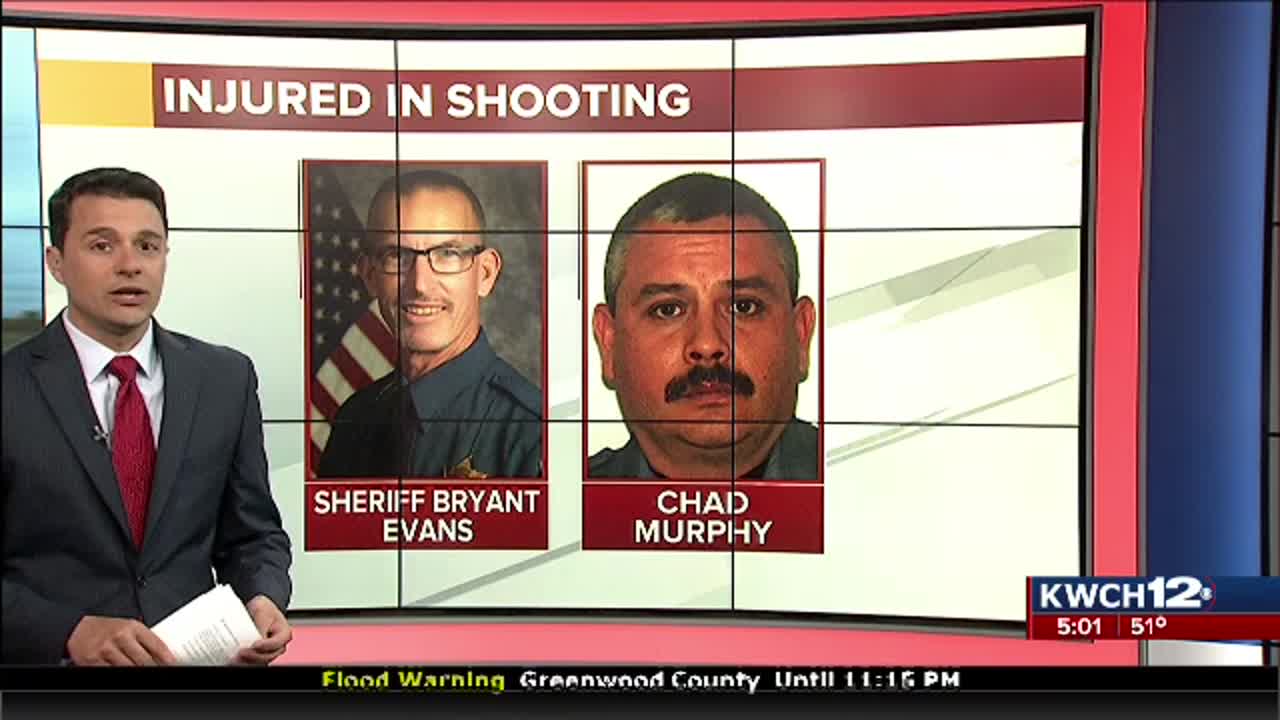 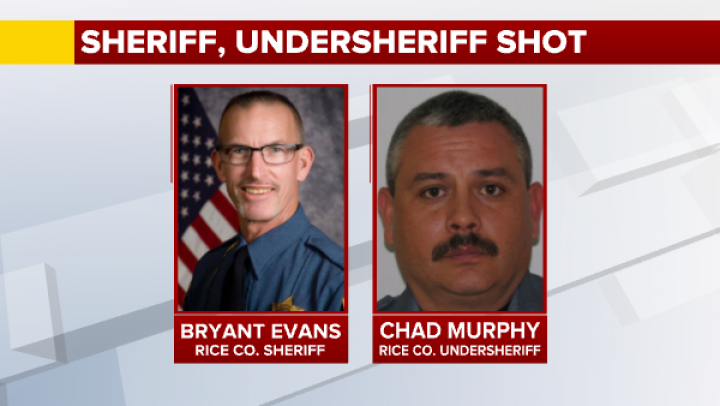 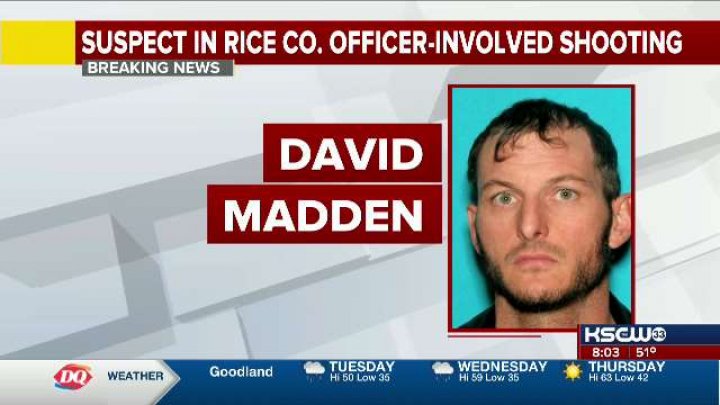 Rice County Sheriff shooting suspect has a criminal past

RICE COUNTY, Kan. (KWCH) The Latest from Rice County where the Rice County sheriff and undersheriff were shot and injured Monday evening in Sterling:

The Kansas Bureau of Investigation (KBI) and the Rice County Sheriff’s Office provided a brief update on the investigation taking place in Rice County.

The Rice County Undersheriff is currently in serious condition, and the prognosis for his recovery is good.

A fund was established for those inquiring about how they can assist during his recovery. Donations can be made at the Alden State Bank in Sterling, or mailed to the bank at:

Donations will be used for medical expenses or other personal or family expenses related to this incident.

If any new information or evidence is discovered during the course of the current investigations taking place in Rice County, it will be pursued and fully investigated. However, presently, no new information or leads have emerged since the recent shootings. If anyone has information about the disappearance of Megan Foglesong, please contact the KBI at 1-800-KS-CRIME.

The Kansas Bureau of Investigation (KBI) announced that the standoff with a suspect who shot the Rice County Sheriff and Undersheriff Monday evening ended just after midnight on Tuesday morning.

At approximately 12:10 a.m., authorities located the body of David L. Madden inside the residence at 490 Avenue S. in Raymond, Kan. Also, found deceased in the home was Thomas T. Madden, 65, the father of the suspect, and owner of the home where the standoff occurred. No threat to the public exists any longer as a result of these shootings.

The investigation suggests that when Madden shot the Undersheriff, a female and a child accompanied him in the vehicle. Madden then fled the area and drove to his residence in Alden to retrieve guns and ammunition. He then went to his father’s home, where it is believed he fatally shot Thomas Madden prior to the Sheriff and deputy arriving. Then it is believed the female left the scene. A short time later, when the Sheriff arrived, which was at approximately 5:40 p.m., he was fired upon and shot in the leg.

The condition of the Undersheriff remains critical but stable, and the Sheriff was released from the hospital.

David Madden was a suspect in the 2015 disappearance of Megan Foglesong, and was also indicted last week on federal firearms charges.

The investigation is ongoing.

The KBI says the Rice County Sheriff and Undersheriff were shot in separate incidents Monday evening.

Sheriff Bryant Evans was shot in the leg. He was released from the hospital overnight, according to a Facebook post from his wife. Sheriff Evans stayed at the hospital to be with Undersheriff Chad Murphy.

Undersheriff Murphy was shot multiple times and was listed in critical condition as of late Monday.

Also overnight, authorities found two bodies in the home near Raymond where Sheriff Evans was shot.

Here’s what happened, according to an eyewitness and the KBI:

At around 5:00, Undersheriff Murphy pulled over David Madden on a warrant charge at the Sonic just north of Sterling in Rice County. That’s when, according to an eyewitness, Madden got out of his vehicle and fired shots at the officer, before fleeing to a home.

That’s the home where Sheriff Evans was shot.

Authorities have not released the names of the two men found dead in the home.

We do know the Bureau of Alcohol, Tobacco and Firearms will be at the home today to sweep for possible explosives. According to court documents, explosives were found in Madden’s home back in 2017.

Eyewitness News is at the scene, and at the hospital where the Undersheriff is being treated. Watch for updates all morning long on Eyewitness News This Morning.

The Kansas Bureau of Investigation confirms the bodies of two men have been found inside a home in rural Rice County where law enforcement were previously involved in a standoff.

Cory Latham with the KBI says a Kansas Highway Patrol SWAT Team forced entry into the home and found the men. Latham would not confirm the men's identities until they have spoken with their families, but he says there is no threat to the public.

Latham says the Bureau of Alcohol, Tobacco, Firearms and Explosives will sweep the house for explosives before KBI enters the home to investigate. According to court documents, ATF agents previously searched Madden's home and found crates containing 24 separate metal pipe bombs and an unregistered AK-47.

Melissa Murray will have live reports from the scene on Eyewitness News This Morning starting at 4:30 a.m.

The wife of Sheriff Bryant Evans confirms he was treated and released from Wesley Hospital in Wichita after being shot in the leg. Undersheriff Chad Murphy is still in the hospital in critical but stable condition.

As the effort to locate the man suspected of shooting the Rice County sheriff and undersheriff continues, the Kansas Bureau of Investigation provides further information on what led up to the shootings.

"Agents of the the (KBI) responded to investigate the shootings, and assist in attempts to apprehend the suspect," the agency says. "...Preliminary information indicates that at approximately 5:10 p.m. Monday, April 29, the Rice County undersheriff attempted a car stop near the Sonic Restaurant, just north of the Sterling city limits. The car stop was related to a warrant for the vehicle’s occupant, David L. Madden, 37, of Alden."

The KBI says within 30 seconds of initiating the car stop, the undersheriff (Murphy) radioed to dispatch that he'd been shot. EMS responded and he was airlifted to a Wichita hospital.

"He is being treated for four gunshot wounds, and is currently in critical, but stable condition," the KBI says.

After the shooting, the KBI says the Rice County Sheriff (Evans) learned Madden likely fled to a residence in rural Rice County, southeast of Raymond and northwest of Sterling.

"He and another sheriff's deputy arrived at the residence and encountered Madden. Gunshots were exchanged, and one round struck the sheriff in the leg," the KBI says.

The KBI says Evans and the deputy called for assistance and additional law-enforcement agencies responded.

"Authorities were able to surround the home, establishing a perimeter," the KBI says.

The sheriff (Evans) was initially taken to the hospital in Lyons before being transported to a Wichita hospital where he remains in good condition.

As of 11:30 p.m. Monday night the standoff at the home in rural Rice County continues with multiple agencies on scene.

The Kansas Bureau of Investigation says the Rice County sheriff and undersheriff are receiving treatment at a Wichita hospital as the search continues for David L. Madden, the man suspected of shooting them.

The KBI says a standoff at a home in rural Rice County -- northwest of Sterling -- continues.

This all began about 5:10 p.m. Monday with the Rice County undersheriff attempting to stop a car connected with a warrant for Madden, The KBI says this car stop preceding the first shooting, happened near the Sonic restaurant in Sterling.

As the Rice County sheriff and undersheriff receive treatment at a hospital, the search for the man accused of shooting them continues.

The first shooting reported Monday afternoon happened near the Sonic on Broadway Street in Sterling. We know there is a second scene at a location southeast of the town of Raymond and are hearing reports of more active areas across Rice County as officers search for the suspect the Kansas Bureau of Investigation identifies as David L. Madden.

Records show Madden has a significant criminal history. Last week, Madden, 37, was indicted on a federal charge of unlawful possession of a machine gun.

Court documents say Madden, who served in the U.S. Marine Corps, smuggled an AK-47 into the United States from Iraq. That same document says a KBI agent investigating the case of a missing woman named Megan Foglesong received information that Madden was suspected to be involved with explosives or explosive materials. This agent the notified the ATF, court documents say.

Foglesong, then 21, was last seen in 2015 in Alden, Kan. This is where Madden lives, records show. Police haven't identified Madden as a suspect in Foglesong's case, but he is listed as "a person of interest."

The court document goes on to say that in February 2017, Madden led police on a high-speed chase through Ellinwood, Rice County and Barton County. He was arrested that day after a standoff with police at his home.

As of 9 p.m. Monday, it's unknown if Monday's shootings are connected to any of Madden's previous cases. State records show he's listed as an absconder with the Kansas Department of Corrections.

The KBI identifies the man suspected of shooting them as 37-year-old David L. Madden.

"Law enforcement from multiple agencies have a residence in rural Rice County surrounded where they believe the suspect is located," the KBI says.

An official with Rice County says there is currently no threat to the public, although a search for a suspect continues after two officers with the Rice County Sheriff's Office were shot in Sterling.

We're told one officer was transported to a hospital in Lyons while a second was taken to a Wichita hospital.

The Kansas Bureau of Investigation tells us two deputies with the Rice County Sheriff's Office have been shot.

"We are trying to confirm their conditions, but the situation is still very fluid," a statement from the agency says.

The Kansas Bureau of Investigation is responding to an officer-involved shooting involving in Rice County.

We've received several reports that at least one officer was shot and injured in the town of Sterling.

"Rice County has an ongoing situation with officers down with multiple agencies responding. At this time, we do not have any information to release. We will advise as updates are available."

A viewer sent us a photo from Sterling that shows a large police presence near the Sonic, 917 N. Broadway.

Right now, we have no confirmation about what led up to the situation. We have several crews headed to the scene.

Continue to stick with us for live updates throughout the evening.