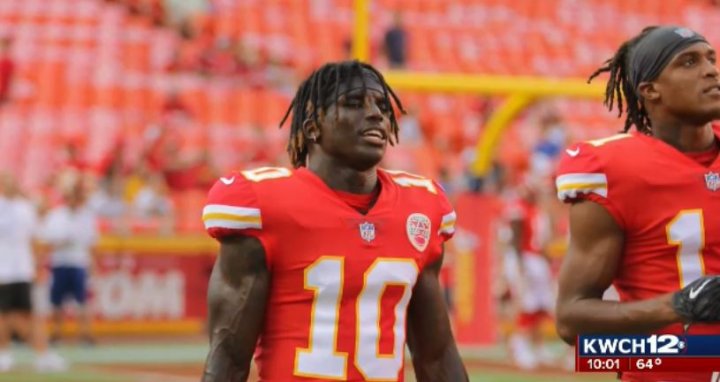 Tyreek Hill Audiotape: What happens next? 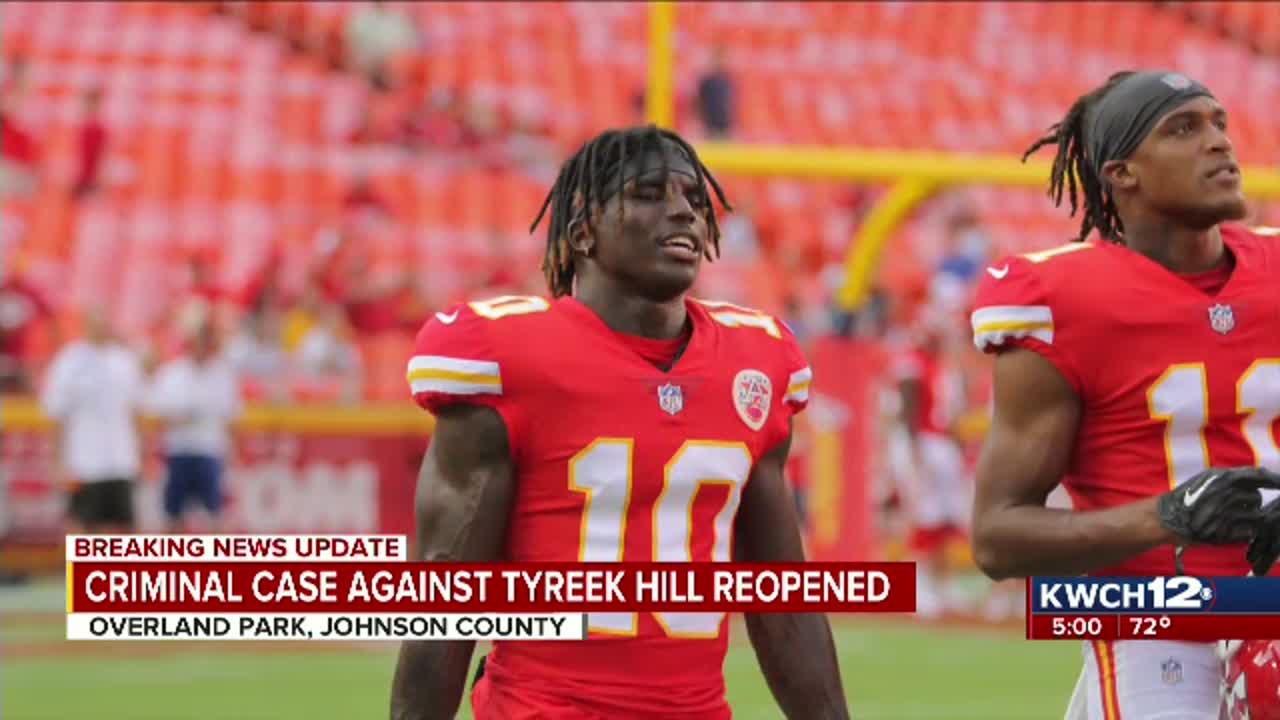 Chiefs owner Clark Hunt said he was "deeply disturbed" by audio of Tyreek Hill discussing injuries to his 3-year-old son but declined to elaborate on the case citing an ongoing criminal investigation.

Hunt spoke briefly with reporters on Saturday, while the team was holding its annual draft party for season ticketholders, but shed little light on what the Chiefs may do with Hill going forward.

"I'd just point out that Tyreek is not with the franchise right now and we're going to go through the process," Hunt said. "We'll make the right decision about Tyreek at the right time."

Hill has been suspended from all team-related activities after audio surfaced Wednesday in which he discusses abusing his son. Hill also told his fiancee, Crystal Espinal, that she should be "terrified" of him during an 11-minute discussion that took place in a Dubai airport.

The audio has caused prosecutors to reopen a domestic violence case against Hill.
___

Reid made the comment Friday as the Chiefs grappled with the fallout from a case involving one of their star players. Johnson County District Attorney Steve Howe did not return a call seeking comment.

On Wednesday, Howe said he would not file charges against Hill or his fiancee, Cristal Espinal, even though his office believed a crime had occurred last month involving the couple's 3-year-old son. He said available evidence didn't establish who had hurt the child.

Wichita attorney Charley O'Hara says he doesn't think the audiotape itself is enough for the Johnson County DA to charge Hill.

He says Hill's fiance, Crystal Espinal, could agree to testify as a witness against Hill, which would be more likely to bring charges.

"That audiotape indicates what we might kind of read between the lines, it's Mr. Hill might be threatening that lady to no testify. But it doesn't really say that exactly, so I don't know how the DA is going to look at it if he's going to have to look at it close," O'Hara says.

The DA could come back with charges, or say it's still not enough evidence to charge Hill with a crime.

"While I would say that the tape is not good for Mr. Hill, there's no real admission in there that he did anything," O'Hara says.

Police were called to the home of Kansas City Chiefs wide receiver Tyreek Hill shortly after a television station aired an audio recording in which he and his fiancee discuss injuries to their 3-year-old son.

Several media outlets reported Friday that Overland Park police went to the home of Hill and his fiancee, Crystal Espinal, on Thursday night after receiving an anonymous call from someone worried about Espinal.

According to the reports, Espinal was fine and officers were at the home for only a short time. A spokesman for Overland Park police didn't immediately return a call from The Associated Press.

Police were called to the home twice last month and determined the boy had been injured. On Wednesday, Johnson County District Attorney Steve Howe said he would not file charges against Hill or Espinal even though his office believed a crime had occurred. He said available evidence didn't establish who had hurt the child.

A day later, KCTV in Kansas City aired part of an 11-minute audio file in which Espinal tells Hill earlier this year that when the boy was asked about his injured arm he replied: "Daddy did it."

Hill denied any role in what happened to the child, saying: "He says Daddy does a lot of things."

Howe has not responded to requests for comment about the audio recording, which the TV station said has been provided to his office.

The Chiefs have suspended Hill while the team looks into the developments. The NFL could also punish Hill under its personal conduct policy.

Last year, the Chiefs released star running back Kareem Hunt following a video that showed him pushing and kicking a woman in a hotel hallway. Hunt was suspended for the first eight games of the upcoming season but has since signed a one-year deal with Cleveland, where general manager John Dorsey is the executive who signed Hunt while he was with the Chiefs.

B-2 Stealth Bomber to fly over Chiefs game Sunday

B-2 Stealth Bomber to fly over Chiefs game Sunday