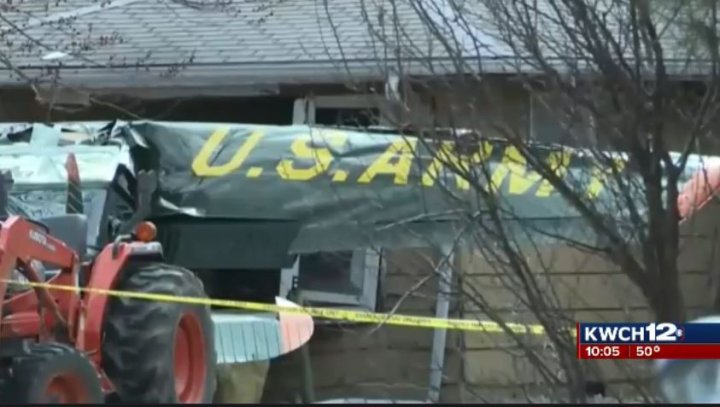 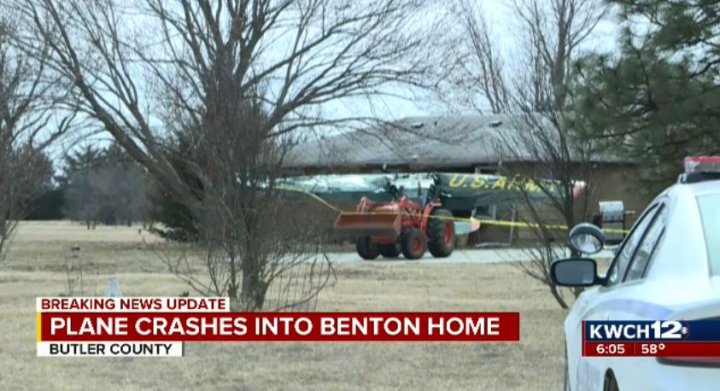 BUTLER COUNTY, Kan. No one was injured, but extensive damage resulted from a Monday afternoon crash in which a small airplane collided with the side of a house in Butler County.

It happened about 1:10 p.m. at Lloyd Stearman Airfield in Benton. The Kansas Highway Patrol says a student pilot flying a Cessna L-19 Bird Dog airplane landed on the airfield's unpaved runway and lost control of the aircraft. The plane veered off to the southwest and hit the side of the house.

No one was home and neither the pilot nor the instructor on the Cessna L-19 were seriously injured. The KHP says the instructor was taken to a Wichita hospital with a suspected minor injury.

We're told the pilot had his pilot's certificate and Monday, was working toward a commercial license.

On the scene, a lieutenant with the KHP says crews worked to collect leaking fuel into containers before clearing the plane from the house.

The home was secured after crews managed to safely clear the plane from the scene. Officials with the FAA arrived on scene to investigate the crash.

Monday, Eyewitness News spoke with neighbors who say there have been prior crashes in the area near the airfield.

Monday, Dave Major was home when the Cessna L-19 crashed into his neighbor's house He says he was the first in the area to build a home along the Stearman Field runway.

"One time I asked my insurance man when we first built my house, I asked if we would be covered if an airplane would hit us. And he said, 'Oh sure,'" Major says. "That's the last thing I ever thought would happen though."

An FAA official confirms the pilot lost control of the plane when he tried to stop after landing on a runway.

In immediate response to Monday's crash, Major says his neighbor used his tractor to pull the plane out of the home. He says the quick action was necessary because the plane was leaking fuel and there were concerns about a fire starting.