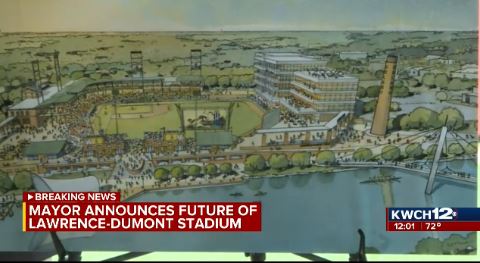 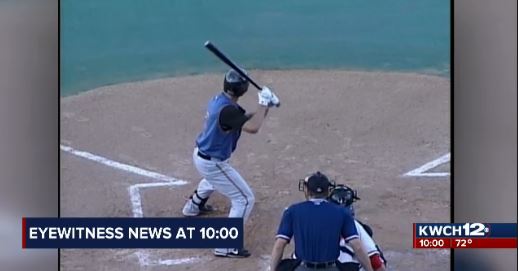 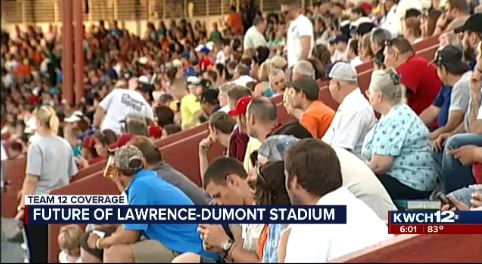 New Orleans Triple-A team could be headed to Wichita

Mayor Jeff Longwell confirmed Thursday morning that the New Orleans Baby Cakes have filed to relocate to Wichita. The Triple-A team is affiliated with the Miami Marlins.

Longwell also released early renderings of a new stadium which will replace Lawrence-Dumont Stadium and be the home of the new team.

"We're not just building a baseball stadium, we're hoping to build a gathering place for the community," said Longwell.

Longwell said the new stadium will feature a wide variety of amenities including a museum and home for the National Baseball Congress, a new pedestrian bridge across the river, an entrance from center field and a baseball village.

He also said he believes the stadium will attract more restaurants and retail to the area.

"It wouldn't happen if we didn't have a Triple-A team coming to Wichita because it certainly is the catalyst that we believe will attract so much more along this river corridor," said Longwell.

The renderings show the new stadium right on the Arkansas River which the mayor said the City of Wichita has been underutilizing.

The new stadium will cost an estimated $60 million to $73 million, Longwell said Thursday.

He said the demolition of Lawrence-Dumont and construction of the new stadium will be paid for by STAR bonds which will capture sales tax generated with the area. Longwell thanked Gov. Jeff Colyer for his help in this area. The governor was present for the announcement.

Longwell said the new stadium will also use a tax increment financing district - which diverts any new property taxes developed in the area back to the development.

He said the city is also looking to private sector.

"We intend to work hard to reach out to the private industry to help us and guide us through part of the process and truly help us with keeping, and getting the most out of every single dollar," said Longwell

Longwell said the Wichita Wingnuts had been given 30 days since Labor Day clear out of Lawrence Dumont. He said he didn't know what would happen with the franchise.

The mayor said he hoped to have an appreciation day for people to come and remember LDS and have access to memorabilia.

The Miami Marlins Triple-A affiliate New Orleans Baby Cakes could be coming to Wichita, according to 4WWL in New Orleans.

The CBS-affiliate says several sources tell them Minor League Baseball will announce the move on Thursday. The station says the Baby Cakes would head north once their lease ends at The Shrine in Metairie, La. in 2021.

A Wichita connection to the team can be found with its manager, Arnie Beyeler who, in college, played three seasons at Wichita State University from 1984-86.

The information about the Baby Cakes possible move to Wichita comes as Wichita Mayor Jeff Longwell confirms he will give an update on the future of Lawrence-Dumont stadium during his media briefing on Thursday.

"It's very important, I mean it's like an anchor for our community, draws a lot of people in from baseball to fireworks at Riverfest," said Delano United Treasurer Christopher Parisho.

It's a project that has been in the works for years.

In December 2016, the city approved STAR bonds for the area of the stadium.

A year later Longwell, announced a new stadium and said the city was in the discussion for bringing an affiliated minor league baseball team.

The Wichita Wingnuts played their final game at Lawrence Dumont on Monday.

A spokesperson says they should be able to tell us more about the team's future after Thursday's announcement.

The Wingnuts have played home games at Lawrence-Dumont Stadium since the affiliated Wichita Wranglers left the city for Springdale, Ark. in 2007.

Thursday, people across Wichita, particularly in the city's Delano District (near Lawrence-Dumont Stadium) are anticipating new information about the Lawrence-Dumont project.

"When I think about the possibility of another Triple-A team that's interested in leasing that space, certainly (it is) important," Kellogg says. "I think the whole STAR bond project hinges on that."

In December 2016, the city approved STAR bonds for the area including Lawrence-Dumont Stadium.

"There is some design ideas floating out there, but nothing firm because obviously, anything they do with the team that they get is going to have to go along with that team and what that team is wanting," Parisho says.

Neighbors in Delano hope a new-stadium project opens up more plans in Delano where a revitalization plan has been on hold. They see the stadium as a lead to further development in the district.

"I’m excited about the prospect in Delano of a potential stadium," Kellogg says. "I want a to see a quality development, it’s always important to me that we covet and take great care of any riverbank land that comes up for development, that whatever is seen and pushed in that way is wonderful and captures our imagination and has beautiful aesthetics. I want the city to covet riverbank again, I want developments that we can be proud of and our children can be proud of."