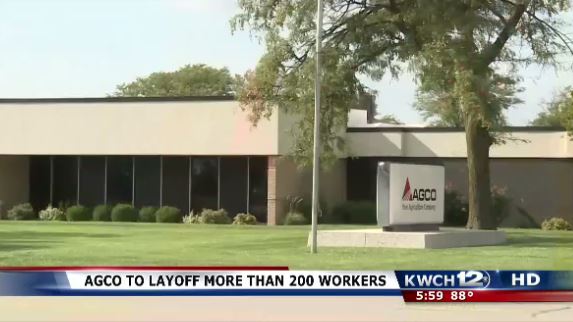 AGCO to layoff hundreds of employees at the end of Sept.

The company says the layoffs will take effect in phases "throughout the balance of the year," and it's anticipated that affected employees will return to work in early 2018.

"In an effort to minimize this impact to our affected employees, the Company will ensure that they remain eligible for AGCO-sponsored medical benefits until the return to work date in early 2018," the company said in a statement released Monday afternoon. "As mentioned, the main focus is to minimize long-term impact on the workforce. Leaders are meeting with affected employees to explain their options during this time. The long-term outlook in the agricultural market continues to be strong and AGCO will continue to react to the market accordingly."

For Hesston, the layoff announcement is another blow to the community after two permanent layoffs earlier this year, one at Excel Industries and the other at GVL Poly. These layoffs left about 200 people unemployed and it has had a ripple effect to local businesses.

"Sales are down, less people coming in," says Weaver Grocers Manager Loretta Williams. "The gentlemen used to come in for the hot lunches. (Now) they're not coming in for that."

"It's quite a long time to be on layoff," says Tucky Allen with Kansas WorkforceOne. "(We) don't know exactly how it is going to impact those employees because we aren't going to do a rapid response, because it is a temporary layoff."

After the layoffs and until workers can return to work in early 2018...

"It's sad," Williams says. "It's kind of a melancholy time, but I just know they'll bounce out of it."

AGCO says employees will still be eligible for benefits. The company says the long-term outlook in the agricultural market looks strong.

There appears to be fire to the smoke concerning rumors of possible layoffs from AGCO in Hesston.

Monday, the AGCO Steelworkers Union confirms it held a meeting for forecast layoffs. The group says it is projecting about 235 layoffs over the course of several months, beginning about the end of September.

One union worker tells us temporary layoffs are not atypical, but this is a difficult time for them to happen.