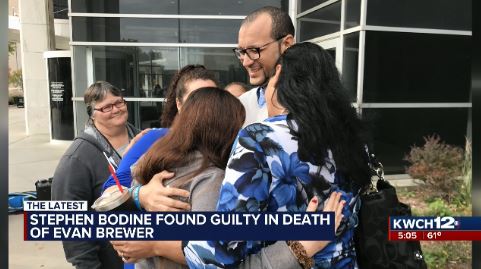 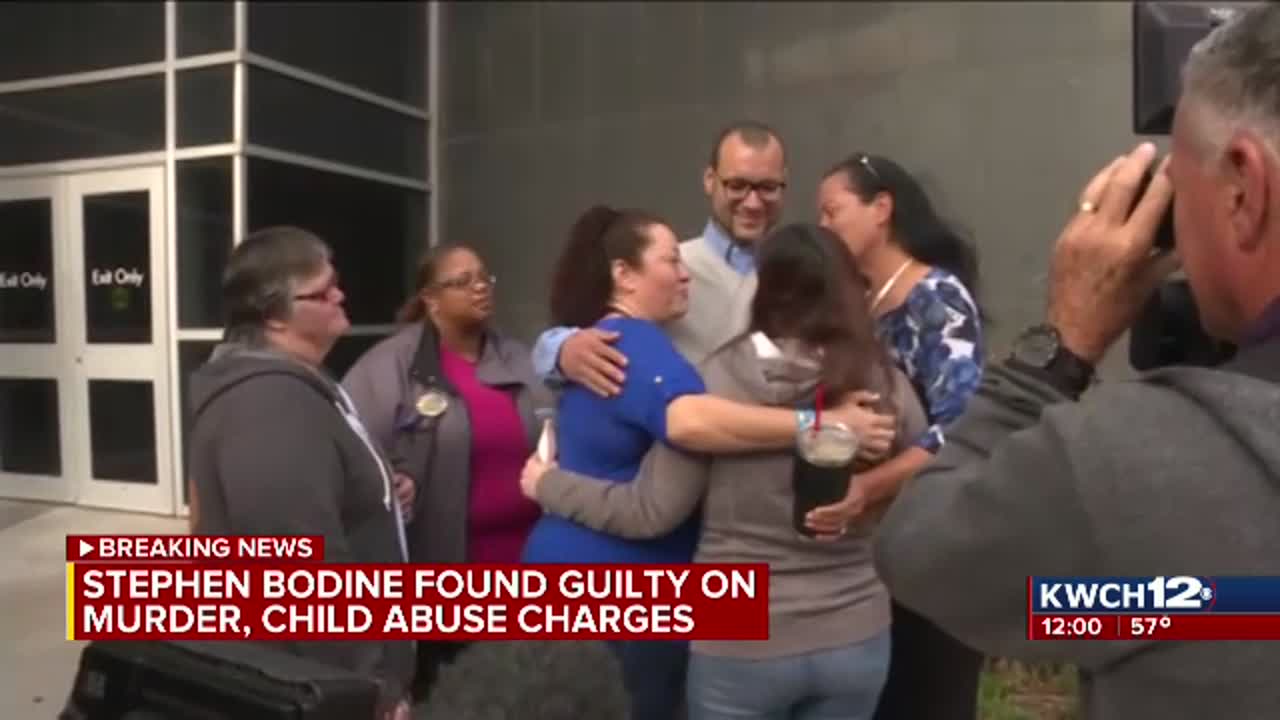 Just before the picture capturing the happy moment was taken, Stephen Bodine was found guilty on all counts in the death of Carlo Brewer's son, 3-year-old Evan Brewer.

"This is the beginning of justice," said Carlo.

Bodine is convicted of abusing and killing Evan Brewer.

The boy's body was found in a concrete structure in a Wichita home where he lived with his mother, Miranda Miller, and Bodine.

"Evan was a beautiful boy," said Carlo. "He was just like any other child you know expect he didn't get to have the imagination like the other children where they might think there's monsters in their closet or under their bed...he had real monsters."

The trial painted a home filled with physical and emotional abuse -- often times making it extremely difficult for the family to sit through the jurors seeing it all.

"I feel bad for them because they had to see things they will never be able to un-see," said Evan's aunt, Carol Brewer. "That is one thing that I didn't want anyone to have to view are those videos and see the pictures."

Bodine's daughter, Samantha, also testified about the things she went through when she was growing up.

"It's not about me, it's about Evan," she said, "I went through some horrible things and I survived but Evan didn't and this is my chance to tell Evans story."

Evan's family cried tears of joy in courtroom when the guilty verdict was read.

The family says their goal now is to fight for other children. They also wanted to thank all the jurors and everyone involved in the case who had to see the abuse Evan endured.

They just want everyone to remember Evan as a happy, beautiful boy

"Evan's death was like giving other children life because it's going to save other people," said Carol.

The Sedgwick County District Attorney's Office says Evan's mother, Miranda Miller, who also testified against Bodine, will plead guilty to second-degree murder for her role in the boy's death.
____

Stephen Bodine is guilty of first-degree murder in the death of three-year-old Evan Brewer.

A jury returned guilty verdicts on several charges, including abuse, child endangerment, kidnapping and other charges.

His sentencing is set for December 17.

The jury has reached a verdict in the trial of Stephen Bodine. He's charged with First Degree Murder in the death of 3-year-old Evan Brewer.

The trial of Stephen Bodine will continue into Wednesday. He's charged with first-degree murder in the death of 3-year-old Evan Brewer.

The boy's family passed around tissues at times. They've attended the trial daily.

A prosecutor also got choked up as she showed the pictures of Evan tied up in the basement.

The state argued Bodine was hiding the child abuse often dominating the home and berating Evan.

The defense argued Bodine wasn't even in the house for most of the alleged abuse, and the coroner never proved how or when Evan died.

The defense also argued that out of thousands of videos and pictures collected, the jury never actually saw Bodine physically abuse Evan, and it's not enough that Bodine was there.

Earlier in the day, the jury watched an hour-long video from inside the home from one of Bodine's security cameras. While the camera was aimed at a door, they could still hear the audio.

One of the prosecutors repeated what could be heard on that video during her closing arguments.

"This defendant made sure Evan was going to be done," said Prosecutor Alice Osburn.

The jury will be back Wednesday morning to continue deliberating and likely give their verdict.
-----

The defense and prosecution have rested in their cases in the trial against Stephen Bodine. He's charged with first-degree murder in the death of three-year-old Evan Brewer.

On Monday, Brewer's mother, Miranda Miller, testified against Bodine saying she should have done more to save her son's life.

READ MORE: Evan Brewer's mother: 'I should have protected my son.'

She said on the day Evan died, Bodine took him into the bathroom and he when he brought the boy out he was wet and unresponsive.

Miller said she tried performing CPR on Evan for 45 minutes, but never called 911. She's also charged with first-degree murder in his death.

Closing arguments are set to begin the trial after lunch. The case will then go to the jury.