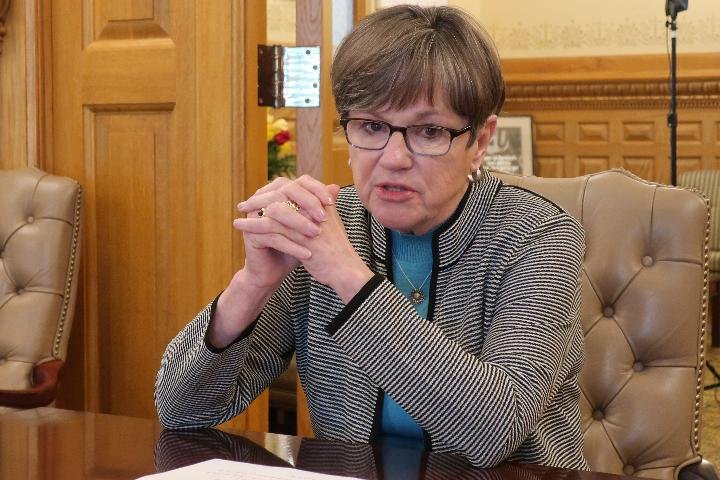 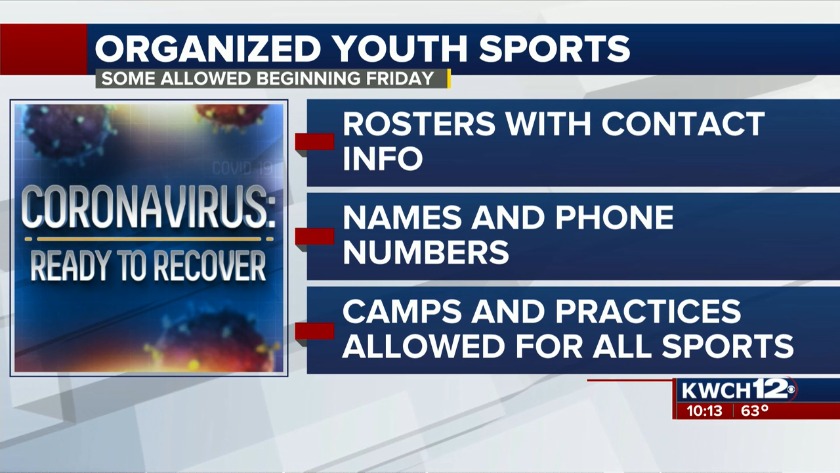 In this photo from Friday, May 1, 2020, Kansas Gov. Laura Kelly discusses the coronavirus pandemic and her plan to reopen the state’s economy in an interview with The Associated Press at the Statehouse in Topeka, Kan. Most businesses in Kansas can reopen starting Monday, but operators of those left out of the initial phase are questioning why. (AP Photo/John Hanna)

Governor Laura Kelly announced Tuesday (May 19) that Kansas was moving forward with a modified Phase 2 reopening that began Friday, May 22.

Mass gathering limits are increased to 15 people or fewer and all businesses except bars, nightclubs or swimming pools are allowed to reopen.

The governor said bowling alleys, theaters, arcades, trampoline parks, museums and businesses deemed indoor-leisure, can reopen in this modified phase. State-owned casinos may also reopen as long as they follow guidelines from the KDHE and CDC.

The governor said organized sports practices are allowed to begin in Phase 2 under the guidelines provided by the Kansas Recreation Park Association.

After the previous shift to Phase 1.5, Gov. Kelly said encouraging new data showed continued drops in both the rates of coronavirus deaths and hospitalizations. She said the decision is purely based on data, not political issues with lawmakers or her visit with President Donald Trump in Washington, D.C. on Wednesday.

The governor attributed the move to Kansans following social distancing guidelines, something she said we can't stop doing right now.

"We may be transitioning to Phase 2, but we still have a long way to go before arriving at anything bordering on normal. Kansans should continue to wear masks, washing hands frequently, and stay home if feeling sick or running a temperature. The trend lines are going in the right direction, but the threat is still very much present," said the governor.

Under this phase, large entertainment venues with a capacity of 2,000 or more must also remain closed. The governor said summer camps that are not associated with a state-licensed daycare are also unable to begin. Fairs, festivals and parades are still not allowed.

Gov. Kelly said Phase 3 is now slated to begin Monday, June 8 with a mass gathering limit of 45 people or less.

Governor Laura Kelly will hold a briefing at 1:30 p.m. to discuss Kansas' response to COVID-19.

The briefing also comes one day before the governor is scheduled to meet with President Donald Trump in Washington, D.C.

"I think the goal is twofold: One, to discuss with the president what's going on here in Kansas and the second is to encourage him to provide some relief to state and local governments," said the governor on Monday in a sitdown interview with Michael Schwanke.

Gov. Kelly said while Kansas is still in need of more testing and PPE support, the state needs to back-fill the revenue shortfalls as we go forward into the recovery phase.

Memorial Day is coming soon, and though COVID-19 has changed the way we usually hold Memorial Day ceremonies, we still can safely honor our country's military personnel who made the ultimate sacrifice. To learn more, visit: https://t.co/iXA6RJsOUb.