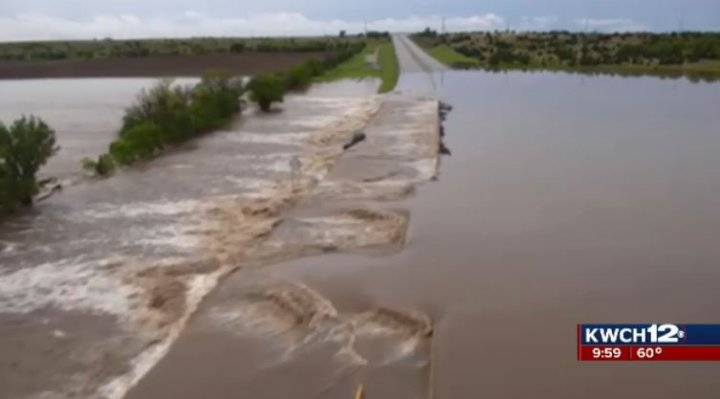 You can follow updates from another eventful, rain-soaked day below:
--Photo courtesy of Lori in Colwich--

Chances for rain will continue through Wednesday night, but rainfall amounts aren't so heavy as they were, especially late Tuesday night into early Wednesday morning.

Isolated storms will continue to move east and should be wrapping up by early Thursday morning. Gusty north winds will usher in much cooler weather for all of Kansas Thursday with lows in the 30's and 40's.

Skies will stay cloudy Thursday afternoon with some spotty rain showers, but gradually, we'll begin to dry out with a mostly clear and warmer weekend on the horizon.

"This is expected to cause several roadways to be closed and multiple residences affected," the county says. "If you reside in an area that is prone to flooding, now is the time to determine if you should evacuate your residence or not. If you choose not to evacuate, our first responders will not risk their safety to respond to you unless there is a life safety concern."

Heavy rain continues to saturate much of south-central Kansas. A number of roads and schools closed Wednesday morning due to the rising water.

Wednesday afternoon, Belle Plaine Public Schools announced classes were canceled for the rest of the week due to flooding

Restoration crews were out at Belle Plaine Elementary School tearing up wet carpet and drying floors damaged by the floodwaters.

The district says all field days, sports practices, and other after-school activities are canceled. A high school track meet has been rescheduled for Friday at Chaparral. Graduation practice will be held Saturday morning before the actual ceremony.

Video now shows why floodwaters forced the Kansas Turnpike Authority to close a portion of I-35 between Wellington and the Oklahoma state line.

Drone footage from KTA and the Sumner County Sheriff's Office" shows water from the Slate Creek overtaking the highway. A vehicle remains stranded in the flooding.

"Most of you are curious why it is closed, here is a look at why. Video starts out looking south down the pike," reads the sheriff's office's post.

The video led to major backups along detour routes including Hwy 77 in Winfield. Kevin McClung captured video of the backup.

"Due to the turnpike closing Winfield is packed with trucks. Line is 1 mile south of Winfield and growing," said McClung on his Facebook page before he captured the lunchtime back up.

So far, no injuries have been reported from the flooding.

Here's a list of road closures and problem areas as of early Wednesday morning. This is by no means a complete list. Be sure to check locally before you head out:
UPDATE: 12:30 p.m.
The Kansas Turnpike remains closed from the Oklahoma state line to Wellington, in both directions, due to flooding.

Highway 81 is also closed from Highway 53 south to the state line, as well.

Many other roads South Central Kansas are closed due to heavy localized flooding.
-----
The Kansas Turnpike is shut down SOUTH at the Wellington Exit down to the Oklahoma State Line. That closure originally began at the Mulvane Exit early Wednesday morning.

City of Augusta
The City of Augusta is conducting flood operations as a result of heavy rain overnight. Severe localized flooding from runoff has occurred and some streets are still not passable.

7th street between Walnut and Lulu is affected. If traveling on 7th street detour south on Walnut / west on 6th / north on Lulu back to 7th.

Walnut at the south city limits is closed.

Lulu is closed south from Harrington and several residential streets in that area are also closed.

Augusta has also closed the dike on Kelly and are working to close the dike on Highland drive. If rivers continue to rise, the city says it may close the railroad opening south of town.

Crews have also conducted numerous water rescues overnight, and they continue to put out sandbags to help alleviate some of the flooding concerns.

The Chase County Sheriff's Office says HWY 177 near Cottonwood and Strong City is closed due to flooding.

Wellington
Crews have shut down US 81 from N. Wellington to the county line because of standing water.