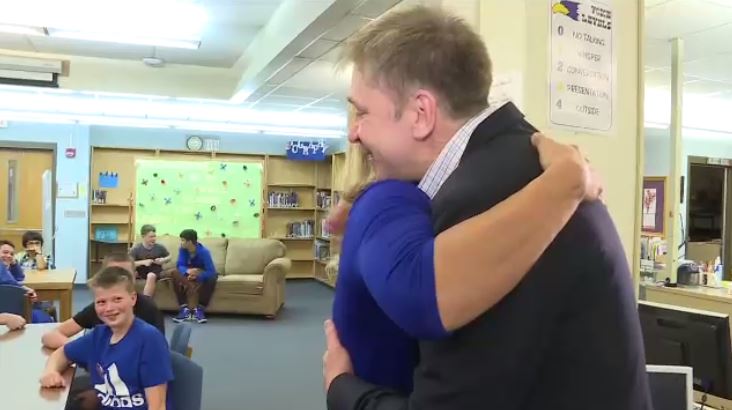 Mrs.Thompson's seventh-grade class spent Tuesday morning gearing up to head to Hutchinson Community College to hear a lecture from Steve Hartman of CBS Evening News. An event made even more special, because for the past five years, Mrs. Thompson has used Mr. Hartman's "On The Road" segments as a teaching tool.

"We watch him every week in our classroom," Thompson said. "We cry with him. We laugh with him."

Thompson and her class are big Steve Hartman fans, and had reached out to Hartman's producer to see if there was a way for the student's to meet him while he was in town. Because of scheduling conflicts however, they were told it wouldn't be possible. Just like most of his stories though…Hartman had a twist up his sleeve, and Mrs. Thompson's class was in for a big surprise.

"Oh my gosh! Oh my gosh," Thompson said, as Steve Hartman walked through the doors of Hutchinson Middle School to a very surprised seventh-grade class. "I just couldn’t believe that he was here in our school. He seems like such a celebrity to us, and just to have him here in our library just blew my mind," she said.

"I'd heard about Mrs. Thompson, and she told me about her class and how they watch every story," Hartman said. "And she really wanted me to come to the class, and I could have just walked in to the class- told her that I was coming. But I don't know, there's just something in me that just wanted to make it...I wanted to surprise her. I wanted it to be something a little more memorable. We have 10 million viewers for each story when it's broadcast," he said. "But there's nothing quite as special as having a room full of kids, who during their classroom time, are watching a story and studying it with study questions. They become my favorite audience members."

Audience members that are starting to impact which stories Hartman tells.

"When I pick stories -what stories do I want to tell, it's starting to enter my consciousness. How's this story going to play in Miss Thompson's class in Hutchinson, Kansas?"

Hartman spent more than 30 minutes answering questions from students and chatting with them about their favorite stories. A memory that will stick with these students and their teacher for a long time.

"Just for them to see him right in front of their faces, it will just drive those stories home even more," Thompson said. "They didn't know it was gonna happen, neither did I. We experienced it together. Just a cool bonding experience for us. They'll never forget it. I'll never forget it."